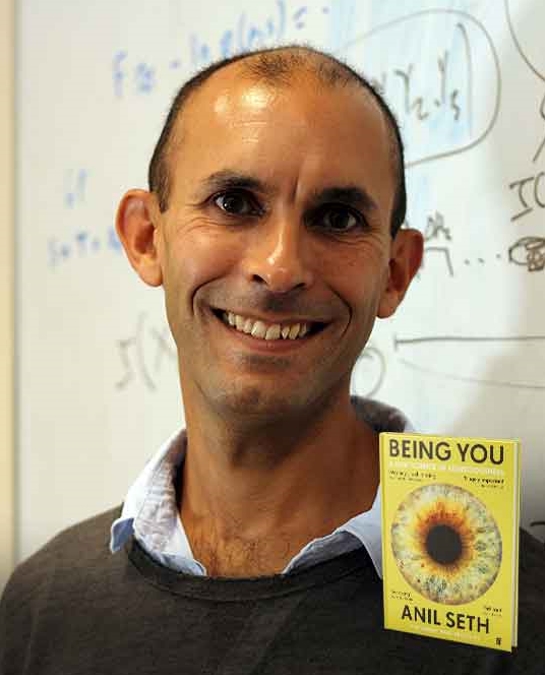 Anil Seth is a Professor of Cognitive and Computational Neuroscience at the University of Sussex, Co-Director of the Canadian Institute for Advanced Research Program on Brain, Mind and Consciousness, a European Research Council (ERC) Advanced Investigator, and Editor-in-Chief of the academic journal Neuroscience of Consciousness (Oxford University Press).
With more than two decades of research and outreach experience, Seth’s mission is to advance the science of consciousness and to use its insights for the benefit of society, technology and medicine. As well as being an internationally leading researcher, he is also a renowned public speaker, best-selling author, and sought-after collaborator on many high-profile art-science projects.
Seth’s latest book Being You: A New Science of Consciousness was an instant Sunday Times bestseller and is a 2021 Book of the Year for the Guardian, the Economist, the New Statesman, the Financial Times, Bloomberg Business, among others. His other books include 30 Second Brain and EyeBenders, and he has collaborated on a wide range of art-science projects from drama (Elegy, Nick Payne) to rap (The Rap Guide to Consciousness, with Baba Brinkman). He is the lead scientist on the immersive science-art experience Dreamachine, part of Unboxed 2022.
Seth’s main-stage TED talk has been viewed over 13 million times and is one of their most popular science talks to date. He was the 2017 President of the British Science Association (Psychology Section) and the 2019 winner of the KidSpirit Perspectives award. He has featured in many high-profile podcasts (including Sam Harris, Russell Brand). He has appeared in several films (The Most Unknown, The Search), appears regularly on BBC Radio, and has written for Aeon, the Guardian, Granta, New Scientist, and Scientific American, among other venues.

Anil Seth: Being You: Is It All Just an Illusion? Investigating the New Science of Consciousness