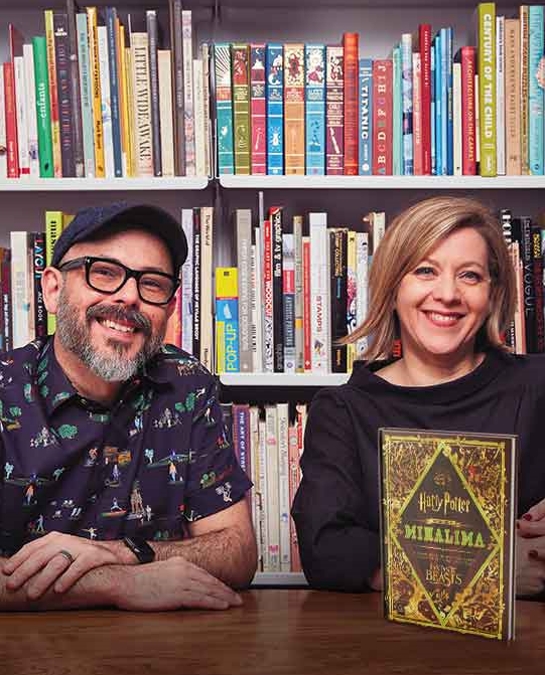 MinaLima is an award-winning graphic design studio founded by Miraphora Mina and Eduardo Lima, renowned for establishing the graphic style of the Harry Potter and Fantastic Beasts film series. Specializing in design and illustration, Miraphora and Eduardo have continued their involvement in the Wizarding World through numerous design commissions, from creating all the graphics for The Wizarding World of Harry Potter—Diagon Alley at Universal Orlando Resort to designing award-winning publications.
Their bestselling books include the MinaLima editions of Harry Potter and the Sorcerer’s Stone, Harry Potter and the Chamber of Secrets, Harry Potter Film Wizardry, The Case of Beasts: Explore the Film Wizardry of Fantastic Beasts and Where to Find Them, The Archive of Magic: Explore the Film Wizardry of Fantastic Beasts: The Crimes of Grindelwald, and J. K. Rowling’s Fantastic Beasts screenplays.
Studio MinaLima is renowned internationally for telling stories through design and has created its own MinaLima Classics series, reimagining a growing collection of much-loved tales including Peter Pan, The Secret Garden, The Adventures of Pinocchio, and The Wonderful Wizard of Oz.

The Magic of MinaLima: Telling Stories Through Design