Thumbnail View
Grid View
Enjoy selected sessions from the #EmiratesLitFest, 3-13 February, from the comfort of your own home with our digital pass.     Buy Now 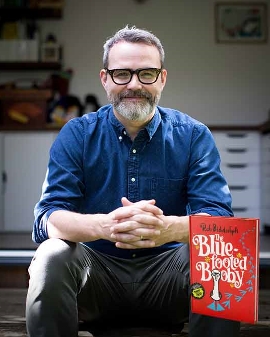 Before life as a published author and illustrator, Rob Biddulph was the art director of the Observer Magazine, Just Seventeen and NME. His first picture book, Blown Away, was published in 2014 and was the second illustrated book to win the overall Waterstones Children’s Book Prize. Since then, Rob has written and illustrated eleven of his own picture books, illustrated many books for other authors and was the official World Book Day illustrator for three consecutive years (2019-21). In March 2020, as schools across the globe began to close their doors, Rob posted a teaser video for a draw-along of his dinosaur character Gregosaurus from Happy Hatchday, and that was the start of Draw with Rob. There are now over 80 videos which have been watched over 4 million times on YouTube alone. In May 2020 Rob broke the Guinness World Record for the largest art lesson when over 45,000 families joined him to draw a blue whale.